The Urban Flows Observatory is concerned with the use of resources in our urban environments. The goal is to understand and demonstrate ways in which they might be used more sustainably. One such resource we hardly give a thought to is something that many of us now use, that less than a generation before we didn’t, and certainly not to the same extent.

We use it to do almost everything, from ordering a taxi, or a pizza, to paying our bills and managing our bank accounts. We talk to our loved ones and can even see them wherever in the world they may be, and increasingly we use it to control our heating and lighting. The device of course is a smartphone, a tablet or a computer, but the technology uses electromagnetic waves that move unseen through our atmosphere and space and occupy a limited range within the spectrum known as radio, or RF (Radio Frequency).

Imagine sitting in your living room 20 years ago… this space represents all the wireless communication going on around you. You’ve got your first Wi-Fi device, you send the occasional email and the odd stranger or two wanders through having a conversation on their mobile phone. Fast forward a few years and your neighbours are there, using their laptops, using instant messenger, shopping for bargains on auction sites and those mobile phone users are frequently coming and going, tapping out text messages.

Today that room is full to capacity with people listening to music, watching videos, playing games, shopping, making sure we exercise, looking after our money, seeing who’s at the front door and now the lights and the thermostat want to join in too. Your relatively quiet space has been invaded and it’s now very noisy and cramped!

The Growing Use of Electromagnetic Waves

Electromagnetic waves account for everything from communication with submerged submarines, to cooking food and ‘seeing’ heat, everything we perceive through vision, use in forensic crime scene investigation, and the various forms of radioactivity.

In our case we’re interested in the band of frequencies called ‘radio’, and more specifically those used for our everyday, two-way communication, so mobile phones, Wi-Fi and the emerging Internet of Things.

It’s worth considering that 20 years ago mobile phones were just becoming commonplace. The first smartphones only started to appear around 12 years ago, but now it seems that everyone is almost permanently attached to their phone. All that ‘communication’ has to be accommodated by the networks, using a limited amount of radio spectrum. While we don’t see it, nor probably think about this resource, it is very valuable. In the UK, mobile network operators paid hundreds of millions of pounds for 4G allocations, totalling £2.3bn and auctions to enable 5G networks have begun.

We’re not only using our connected devices more, we’re also using them for increasingly critical tasks. We have apps to manage almost every aspect of our lives, how we get around, what we eat, our health and our finances. Although mobile network operators are highly regulated, some of the other systems we use regularly, such as Wi-Fi, are not. In urban settings the number of routers and access points being installed is both uncontrolled and poorly understood. However these units are in continual competition for a couple of handfuls of channels.

There’s also the matter of the amount of energy required – especially taking into account the data transmitted to cloud services and handled by large data centres. The electricity used by the various systems is reckoned to represent 1% of a country’s consumption. On top of this, there’s the charging of all those portable devices, as well as everything that stays plugged-in in our homes.

As part of the Observatory’s work, we’re going to attempt to gain a broad understanding of just how crowded the RF spectrum is in our cities. We’ll firstly use Sheffield, then Newcastle, as case studies to produce maps of spectrum use. To do this we’re purchasing equipment for both so-called ‘drive-test’ and ‘walk-test’ surveys, as well as a system that can provide information as to the direction of a radio source. The drive-test system will be installed in our third Urban Flows vehicle, an electric Smart Fortwo car, ‘Morca’. 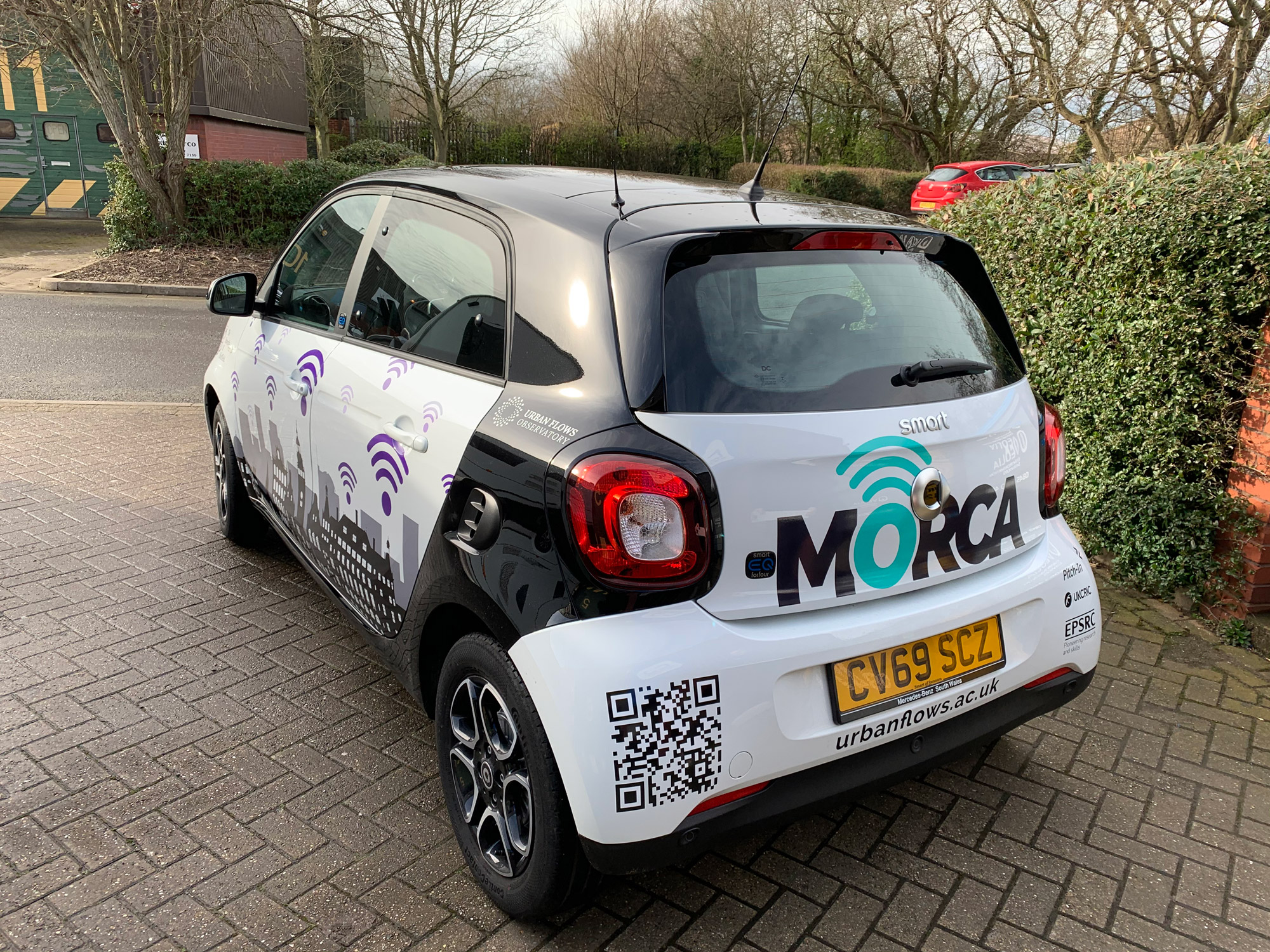 The structure of our urban landscapes is changing rapidly and we need to know more about how large-scale construction affects the effectiveness of wireless networks, to provide a reliable communications infrastructure.

Having gained a detailed understanding of what’s going on, we’ll begin the second part of the work, looking at how we can better manage our use of spectrum, and the extent to which the introduction of new systems, such as 5G, will influence what happens in this space.

Look out for Morca around the city of Sheffield as the Observatory gets back on the road, and for future blog posts as this work progresses over the next couple of years….