Stormwater management is a vital process for cities and towns. It keeps surface water from heavy rainfall away from roads/streets, courtyards and other urban sites. This results in reduced flood impact on people and property, demands on drainage systems are lowered and healthy streams/rivers as well as sustainable communities are able to thrive.

Changes in microclimate conditions are also imposed by the urban form and layout. The Urban Heat Island (UHI) phenomenon is an added perturbation alongside global warming that causes a significant increase in urban temperatures compared with surrounding rural areas. The ‘canyon-like’ effect and high quantity of reflective surfaces found within cities traps heat in compact urban areas.

A Sustainable Shift
Urban planning has been undergoing a shift to include green infrastructure and Sustainable Drainage Systems (SuDS) to tackle flood-risk and the UHI. SuDS are designed to efficiently manage the drainage of surface water in the urban environment by storing or re-using at source. Examples include vegetated devices such as green roofs, rain gardens, swales and street trees.

One reason for the inclusion of SuDS is the benefit provided by evapotranspiration (ET) for stormwater management and the UHI, which is the focus of this project. Evapotranspiration is the process by which water transpires through pores and evaporates from surfaces of green foliage, vegetation and growing plants. Evapotranspiration is important when considering water and energy fluxes in the urban environment.

The aim is to encourage ET effects within the hydrological cycle in urban areas by using vegetation to provide a reduction in initial surface runoff. To protect urban areas from flooding, storage capabilities of green surfaces must be restored and ET is responsible for this. Characterising ET also provides insight into how much of a city’s thermal energy budget is used up by green surfaces.

ET also helps to mitigate UHI effects. Increased heat stress leads to negative health outcomes and increased mortality. The record heatwave that hit Europe in August 2003 claimed an estimated 35,000 lives (Vandentorren et al., 2006). Mortality rates were much worse in urban areas and lower in vegetated rural areas. Returning natural processes to cities through the provision of vegetation can help to mitigate against increased heat stress to the local population.

Mitigating Future Flood Risks
An influence on policy to mitigate future issues arising from flood risk/UHI must come from academic research. The decision to deploy urban green infrastructure on a large scale is based on evidence that they perform well, which estimations of ET can provide.

The relationship between rainfall and runoff from a green roof provides insight into retention performance, explored in Stovin et al. (2013). The amount of runoff observed, post storm-event, is dependent on the evolution of moisture flux levels within the substrate and ET rates during the antecedent dry period.

Stovin et al. (2013) and Berretta et al. (2014) showed a clear influence of green roof moisture content on the moisture loss rate due to ET, which was found to have an exponential decay in the dry periods.

It is important to note that there are well-established agricultural models, such as Penman-Monteith, that allow the estimation of potential ET from well-watered reference crops. However, there are no standard formulae to describe ET in dry periods from the broad range of plant types found in complex urban environments.

New Methods of Studying Evapotranspiration
Studying ET is difficult, particularly in urban areas, therefore this project investigates new ways of doing this. The current research project involves implementing extensive green roof monitoring to reliably quantify ET from green roof test beds. The project will endeavour to use various methods that can be transferrable to other urban green infrastructure sites.

Hydrological parameters are not easily determined at city-scale given the complexity of the shapes and sizes of urban green spaces. Different methods must be introduced in the context of SuDS.

This project will explore three new methods to explore ET in a SuDS like setting whilst still using a water balance approach alongside for comparison/validation. ET is more than just a transfer of water from one medium to another, it is also a transfer of energy, which is central to the chosen methods.

The three energy-based methods that will be used to quantify ET are the aerodynamic method, remote sensing and porometry (porometry also considers physical attributes of plants such as diffusion rates through leaf pores). The water balance technique used for validation is Lysimetry (based on measurements of substrate mass changes due to ET losses).

There is transfer of energy when water evaporates and transpires from green surfaces during a change of state from liquid to gas. The green roof monitoring equipment is intended to detect this energy change, which can provide information about ET rates.

The energy change associated with ET can be estimated by measuring climatic profiles above green roof test beds as well as energy stored in the test bed substrate/soil. The monitoring equipment includes high resolution temperature thermocouple, wind speed and humidity sensors mounted at different heights above each green roof test bed. Using this layered setup of sensors (including in-soil sensors that monitor heat storage), the components of energy exchange between the green roof and the adjacent atmosphere can be modelled.

This energy flux monitoring will be repeated across four green roof test beds, each with different soil/vegetation compositions that represent naturally occurring urban areas or engineered SuDS. ET will be estimated from each test bed using each of the three stated methods, using the water balance approach as reference. Water balance approaches that use lysimeters have been tried and tested, it is the standardised way to determine ET from smaller scale test samples of green spaces. The method requires rainfall sensors, in-soil sensors that monitor water content and tipping bucket mechanisms to monitor runoff. Lysimetry monitors incoming and outgoing moisture flows from a sample space as well as information about moisture changes in the soil to estimate ET. This is an equipment intensive method and does not tie in with the longer term applicability of this project, which is to quantify the urban ET flux (only used for reference). 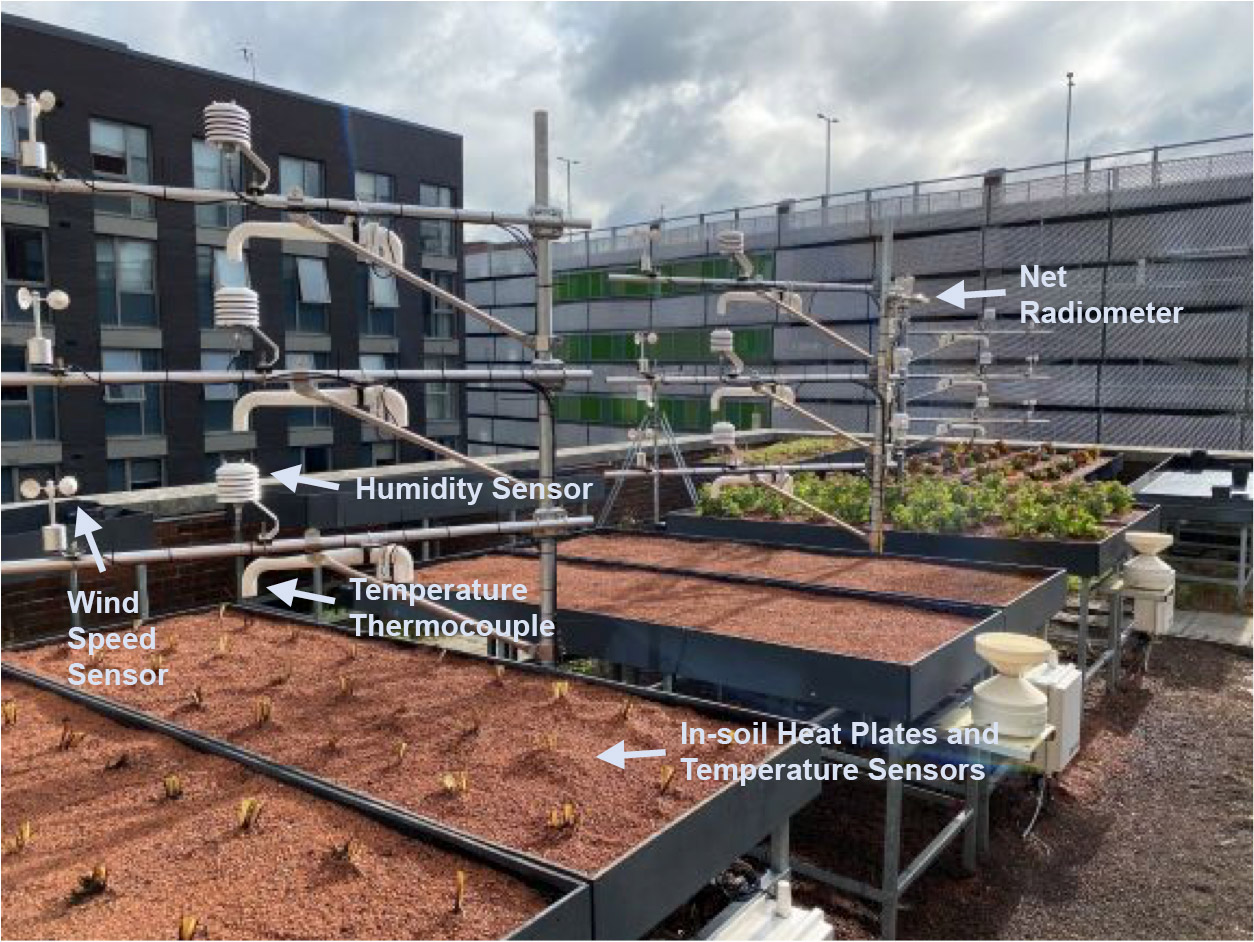 Knowledge on ET is available, but the purpose here is to discover how to reliably measure it. The challenge will be explored by testing the chosen method’s ability to estimate ET whilst discerning the suitability of each method’s application to install SuDS in cities.

This project intends to raise confidence in ET estimation approaches given specific plant configurations and surroundings. Novel techniques are being used to determine the performance of green infrastructure. If this is achieved, urban planners will have increased understanding about the effectiveness of current or planned SuDS.